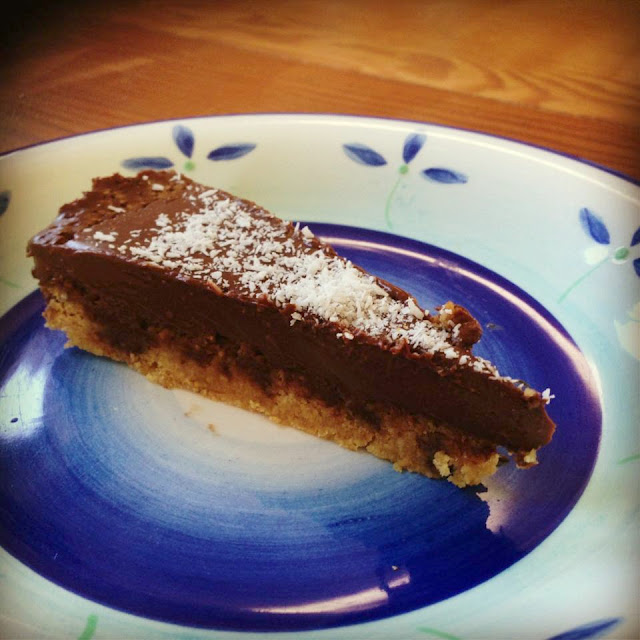 As we're heavily reducing our dairy and gluten intake it's great to have a dish that satisfies those sweet naughty little cravings while keeping us on track with our dietary requirements.

My mum shared this recipe with me..... here's the Thermomix conversion:

Method:
Pop cashew nuts in TM bowl and blitz on speed 9 for 5-8 secs until finely chopped. Add rice flour, rapadura sugar and salt and mix on speed 5 until combined (about 3 secs). Add softened butter and mix on speed 5 for about 8 seconds or until fully combined and mixture is holding together. Press into lined and greased springform cake pan and bake in moderate oven for 20 minutes. Set aside to cool.

Once base is cool and your TM bowl is cleaned and dried add chocolate and chop for 7 seconds on speed 8 then add your coconut milk and cook for 2 mins speed 2 at 50 degrees. Pour over base and leave in fridge overnight to set. Before serving sprinkle with desiccated coconut and enjoy!!


Would love to hear what you all think of this one, it's definitely one I'll be making over and over..... (we'll soon be sick of it here!)

Posted by Ashleigh at Friday, September 06, 2013 No comments:

It's that kind of day..... slightly cool, drizzly and all cozy feeling. Feels like a good day for play dough. 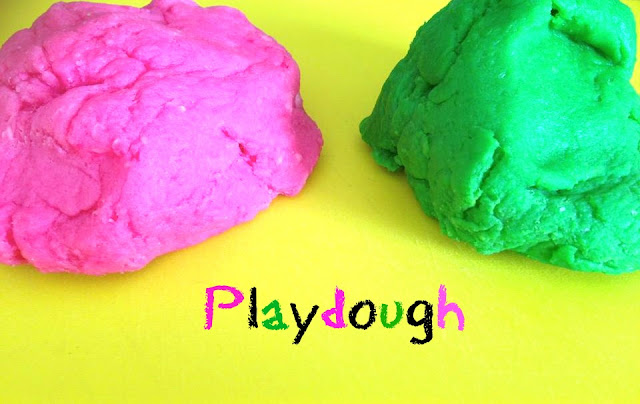 All you need is standard pantry supplies and a few minutes and the kids are away creating all sorts of creatures and play food. 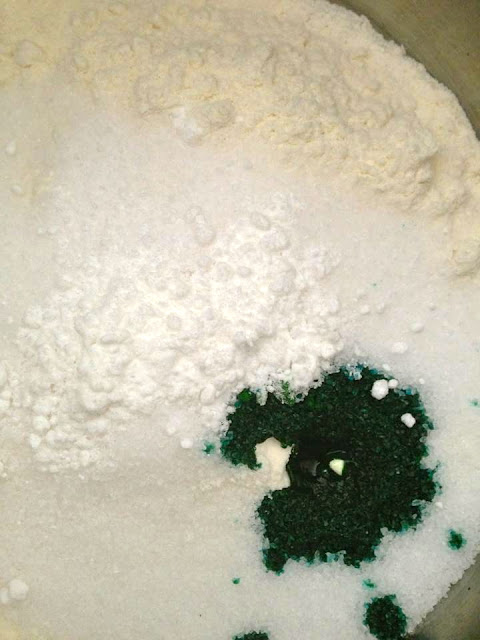 Cook on med-high heat and stir stir stir until it begins to bind together.
Keep stirring till it's all in one big clump. That's it you're done.
When the kids have had enough you can be store this in an airtight container in the fridge for a couple of months. 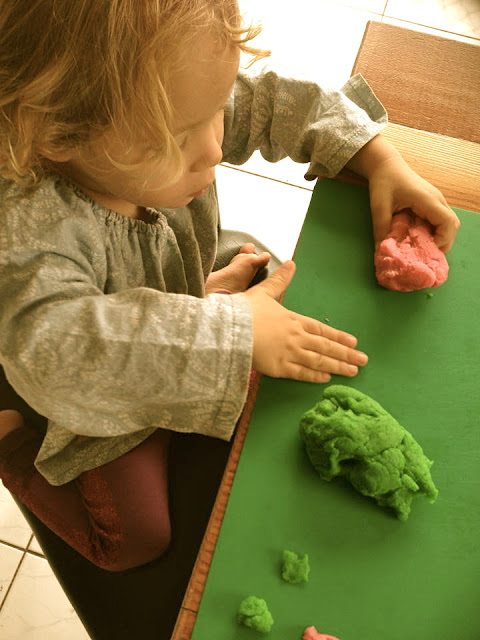 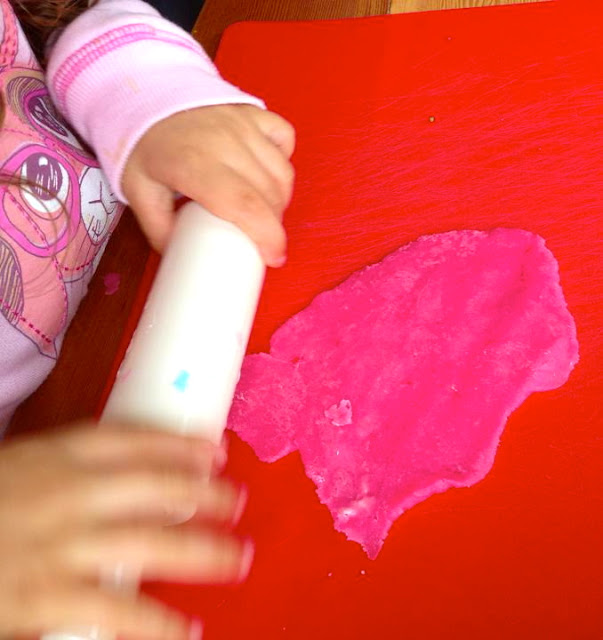 It may sound strange and a waste of time to some, but for me baking my kids birthday cakes 3 a year,  year after year cutting the round top off my domed cakes to make them flat I wondered if the old wives tale I heard years ago actually worked???

Those old wives say to wet a tea towel, wrap it around the cake tin and secure it with a safety pin! 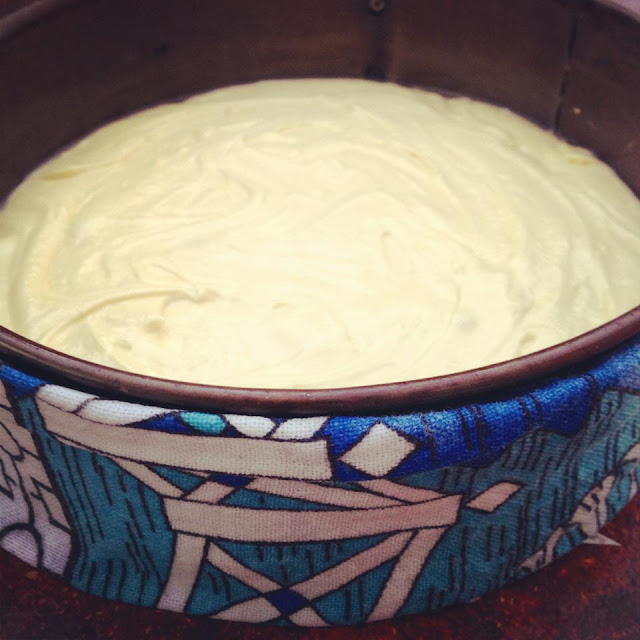 Well finally I remembered in time, before popping it in the oven, to give it a go.
I couldn't believe it actually works!! The top did not rise a bit and was perfectly flat Yippee!!! No more *ahem crooked trimming for my kids birthday cakes and I can move straight on to decorating. 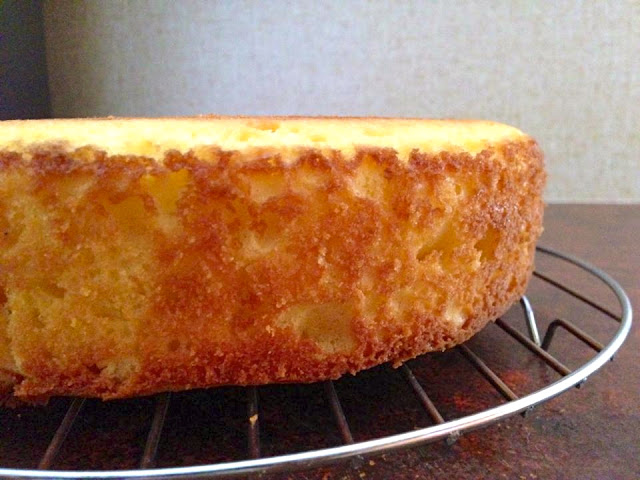 My only tip is to use an old tea towel and to find your longest one as several of mine were too short.
All you home bakers out there have got to give this a go, and let me know how you go.....

Here's a yummy scrummy in your tummy recipe for fluffy apple and cinnamon scrolls...
I used a thermomix recipe which can be found here.

APPLE AND CINNAMON SCROLLS (Recipe for no Thermomix)

Method
Place sugar, yeast and warm milk (I heat up in microwave for 1 min) in jug, stir then let sit for 10 mins in a warm area until frothy.

Place yeast mixture, butter, flour, salt and egg in TM bowl.  Mix well to combine. Knead for 10 mins.
Remove dough and let it rise for 60 minutes in bowl covered with clean tea towel, in a warm spot.
After dough has doubled in size, remove from bowl and divide into two.

Take one portion and roll it into a rectangular shape of 3mm thick.  Sprinkle 1/3 cup of brown sugar evenly over the dough (but leaving 1 to 2cm at the top of one long edge).  Sprinkle 1tsp cinnamon over the dough, then apple.

Starting from one long edge roll the dough tightly to the other edge.  Press the dough together at the end to make sure it doesn't unravel.

With a sharp knife cut the dough on the cross section into 2 to 3cm scolls (depending on how fat you want your buns!)  Repeat with remaining portion of dough.
Place the scrolls spaced evenly apart into lined cake tins / oven trays

Let rise again for 30 to 60 minutes to let them double in size.  You can leave them to prove longer than this if you have the time (it will make them fluffier!).  Bake in a hot oven at 200C for approximately 20 minutes until they are golden brown and delicious! 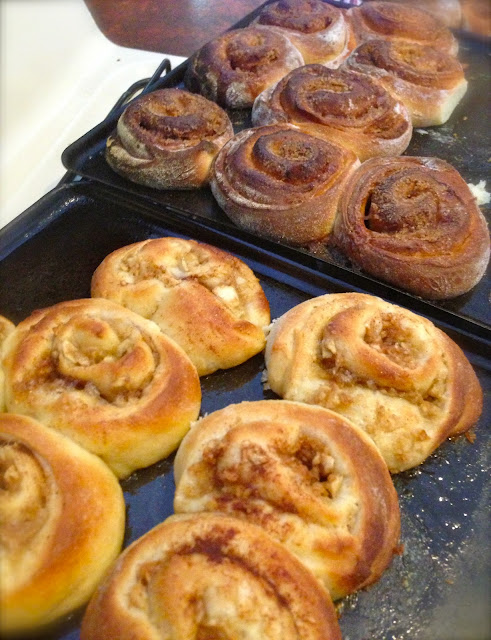 It's quite sad when a recipe takes half and day and then you over cook your second batch!!!
Posted by Ashleigh at Friday, January 11, 2013 No comments:

So many people have a very set view on the perfect choc chip biscuit.....
My preference is definitely a crunchy outer with a perfectly chewy centre mmmmm

So I have finally discovered the key to the perfect way of cooking my all time favourite biscuit with a chewy centre!!! 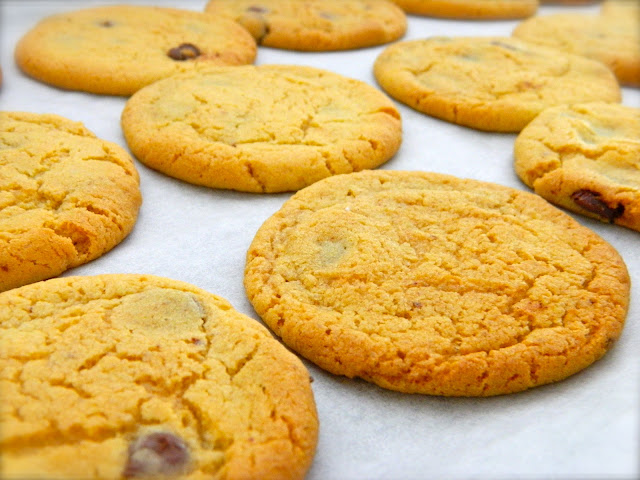 Place butter, sugars and vanilla into TM bowl.
Cream together for 1 minute on speed 3-4.
With TM still running, add egg through hole in the lid and continue on speed 3-4 for 30 seconds.
Add flour and salt & knead on interval speed for 30 seconds.
Add chic chips & stir through with a spatula.
Roll teaspoonfuls of the mixture and place on trays, flattening the top slightly.
Leave room for spreading.  Bake in moderate oven for 10-15 minutes.
Here's the key: After 10 minutes of baking give them a whack with a spatula then return back to the oven for the last 5 mins.

Ok this sounds a bit strange but trust me it really works!!!
You know you want to give this a try!

For the love of eggs

We're in egg overload here!!!
When the chooks are laying they're laying well!! 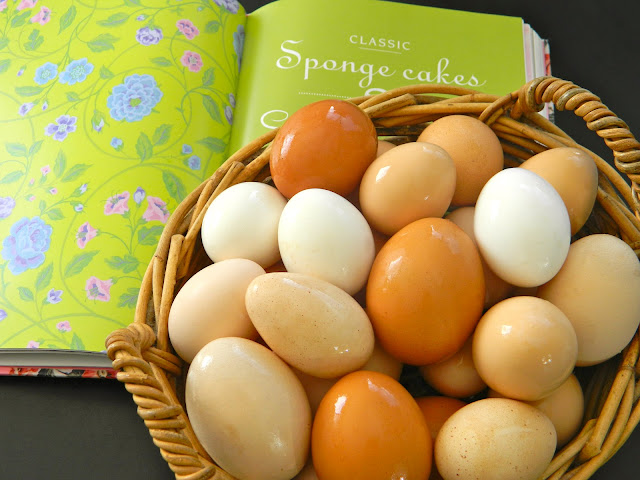 Eggs of all shapes; sizes; colours. 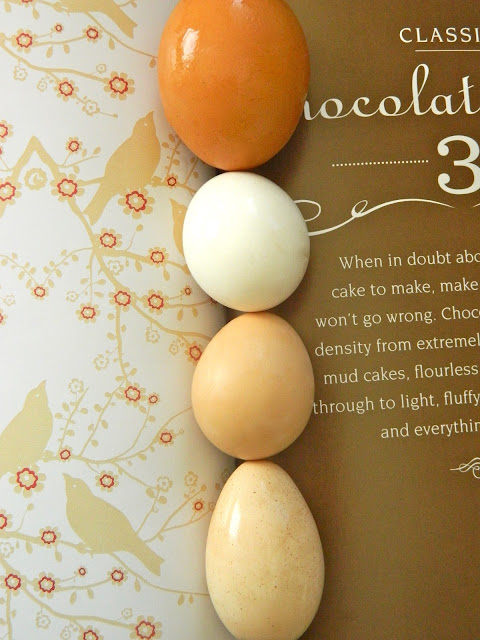 It's definitely time to try those recipes with 6-12 eggs that I usually skim over .... 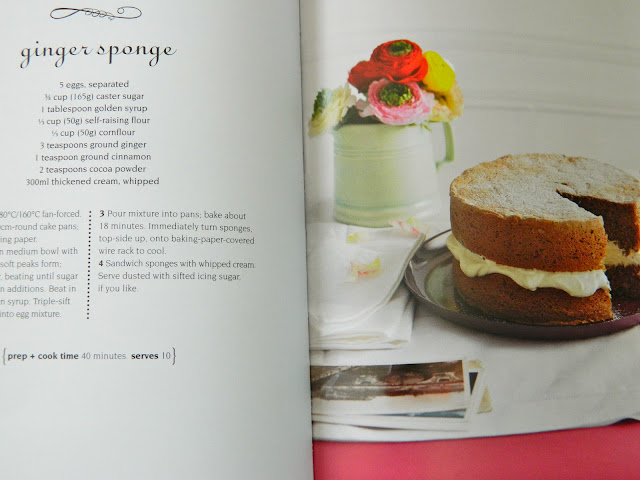 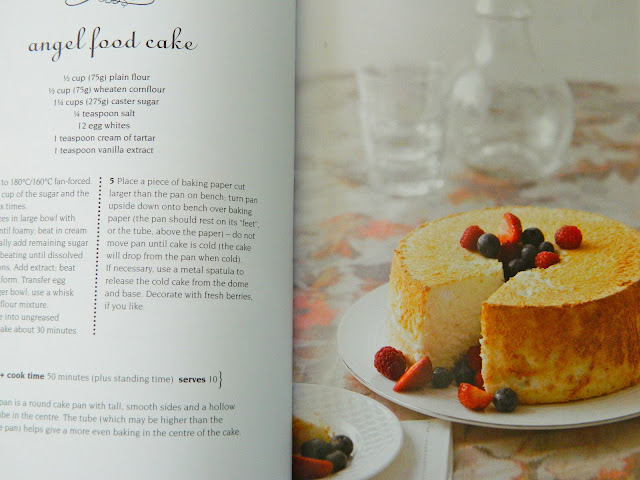 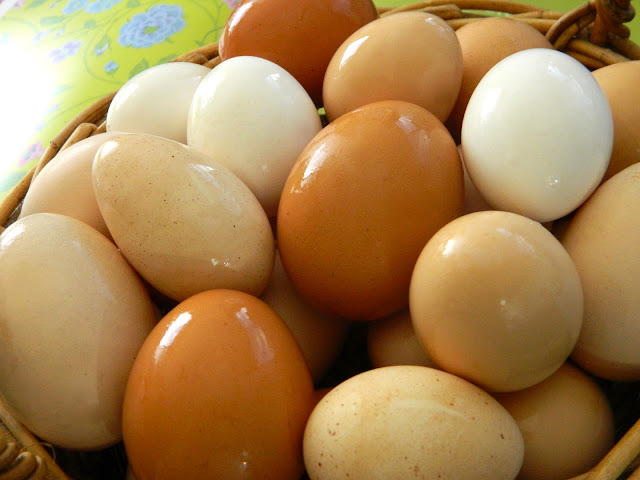 Time to get baking xxxx
Posted by Ashleigh at Sunday, August 19, 2012 No comments:

Just another reason why I LOVE my Thermomix. We have a bountiful crop of Tomatoes at the moment. We usually bottle Tomato relish or freeze Tomato sauce for pastas.

This crop I was looking to do something different so I stumbled across this recipe for Tomato Paste from the Recipe Community found here, it is seriously soo easy to do whether you have a Thermomix or not. 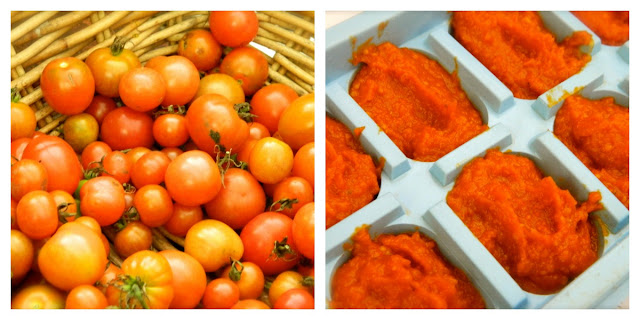 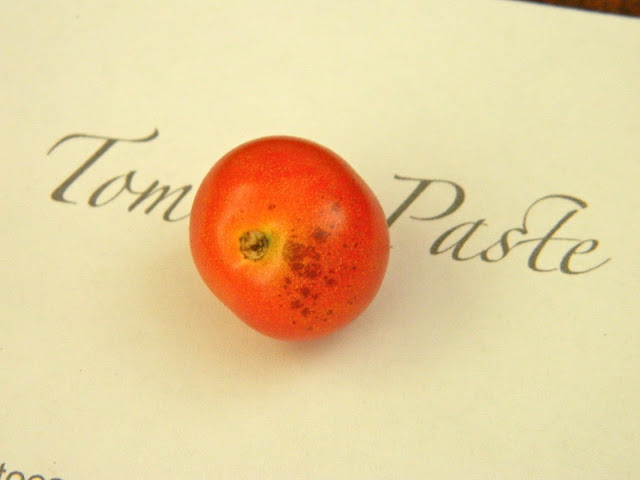 I put the whole harvest which was about 1.2kg in the Thermomix bowl - I squished the lid on and chopped for 10-30 seconds on speed 6.
(If you have more tomatoes than this it's a good idea to chop them in batches so you don't overload your precious Thermomix) 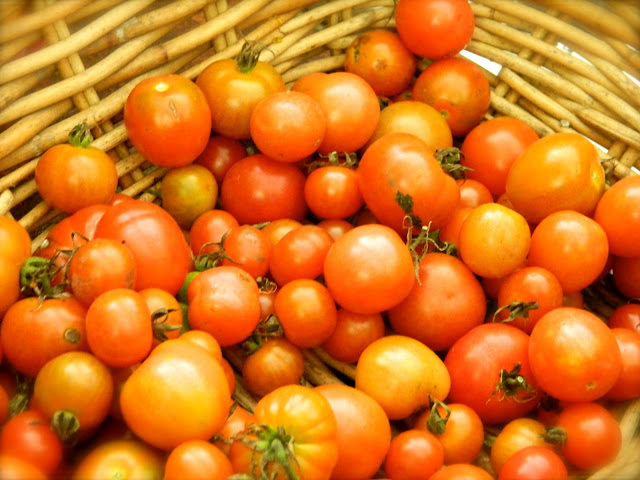 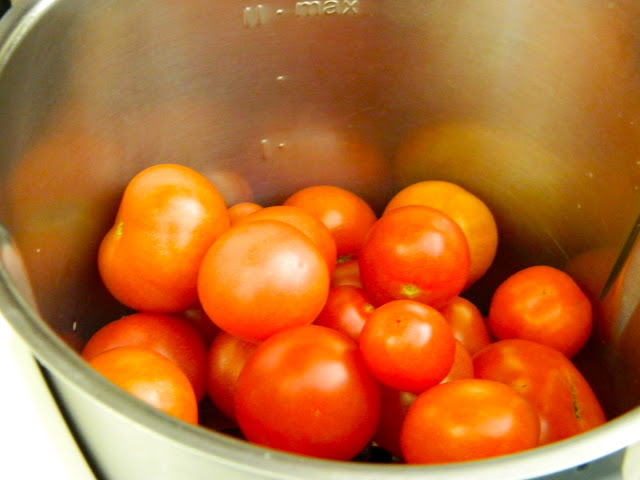 Add 1 tbspn sugar, 1 tbspn cold pressed olive oil, 2 bay leaves, whatever herbs you have on hand (I popped in a handful of parsley and basil) and 1 tspn rock salt 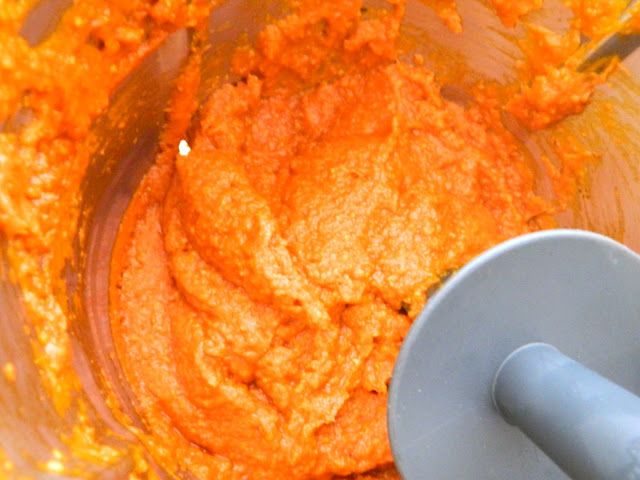 When finished turn the speed up slowly to 6 then work your way up to 9 for 1 minute
-Repeat the cooking and blitzing process until you have the desired consistency.

I found just 2 lots of cooking was plenty and had a gorgeous thick tomato paste by the end. 1.2 kg of tomatoes turned out to be 1 1/2 ice cube trays!

Pop into ice cube trays and freeze. Once frozen keep in a snap lock bag in the freezer. I find for a standard recipe 2 of these cubes is the perfect amount. 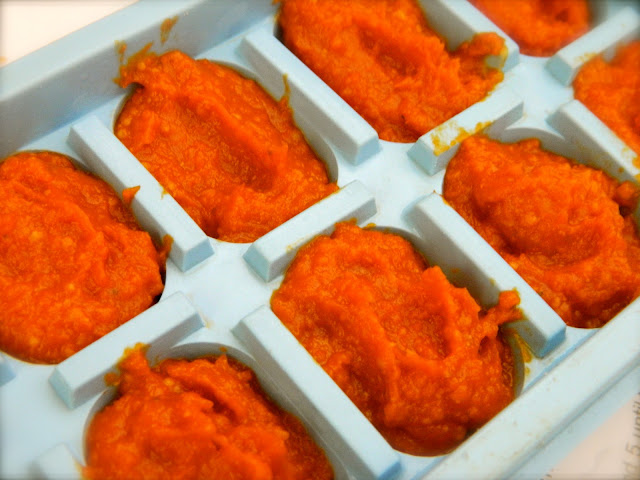 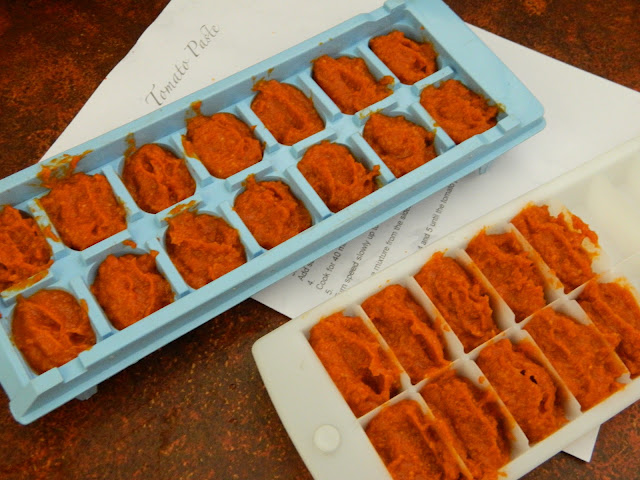 I use tomato paste quite a lot and this is really worth the effort, you know exactly what is in it and it will make you smile every time you cook with it!

*Just a warning the smell is hypnotic & your nostrils will be incredibly happy. You may just stand over the Thermomix for the 40 minutes waving the smell your way!!!!
Posted by Ashleigh at Friday, August 03, 2012 5 comments:

Promote Your Page Too

Ashleigh
Hello! Thank you for stopping by. It's here where I share my love of baking, sewing and family making. Keep up to date with Dashes of Love's creations and ramblings on Facebook.